The world we live in is made from a handful of elementary particles. The current theory has twelve particles and their corresponding antiparticles out of which normal matter, like atoms, is composed. The twelve particles all have intrinsic magnetic moments which can have two orientations (think of having a bar magnet with either its north or south pole pointing up). Physicists describe this by saying these particles have spin 1/2 (even though nothing is spinning). They also all obey the Pauli Exclusion Rule which states that no two identical 1/2 integer spin particles can be in the same quantum state. The twelve particles are divided into leptons and quarks each of which has three families. This Table shows the relationship between the particles: 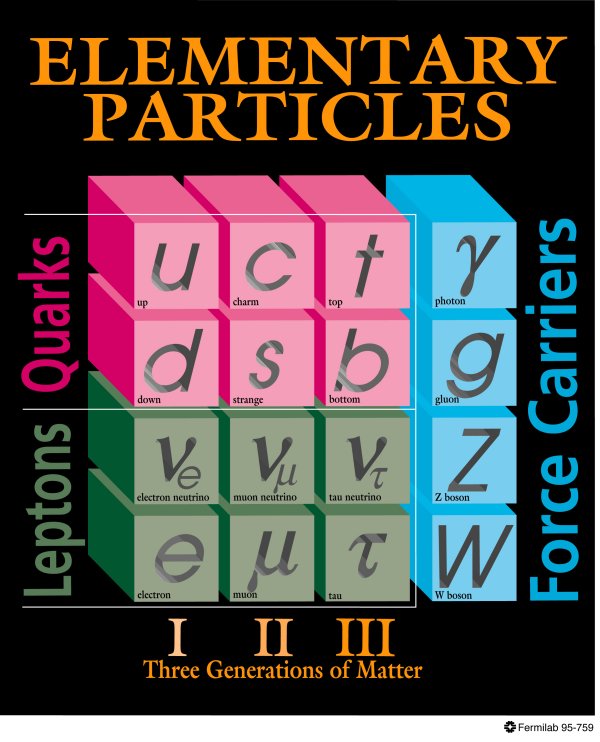 The Table also shows four other particles (gluon, photon, W and Z boson) which are called force carriers as they transmit the strong and electroweak forces between particles. These force carriers all have different spin than do quarks and leptons. They have spin 1 and are not constrained by the Pauli Exclusion Rule.

Why this apparent split between spin 1/2 and integer spin particles? Why do some particles obey the Pauli Exlusion Rule and some do not? We don't know the answer but a theory has been proposed to help explain it. It is called supersymmetry (or SUSY). It postulates that for every known particle, a superpartner exists which has a different spin. So there would be an electron-like particle with spin 0. We call this particle a selectron. The same for quarks, which have superpartners called squarks with specific names like stop and sbottom for the partners of the top and bottom quark. The standard integer spin particles also have superpartners which have spin 1/2. So photons partner with spin 1/2 photinos and gluons with spin 1/2 gluinos.

Many experiments at Fermilab and CERN have searched for supersymmetric particles. None have been found indicating that, if they exist, those which are easiest to produce must be heavy. Since they are similar to the quarks and gluons which make up a proton, squarks and gluinos should be readily produced in proton-antiproton collisions. While most squarks are anticipated to be heavy, there could be lighter bottom and top squarks. While it seems like a paradox, the higher masses of bottom and top quarks could lead to smaller masses for their superpartners. So searches for both top and bottom squarks have been underway for the past few years.

Many SUSY models introduce a new quantum number to differentiate normal and supersymmetric particles. Conservation of this new quantum number implies two things. First, that SUSY particles are produced in pairs, for example a proton-antiproton collision would produce a bottom and anti-bottom squark pair. Second, the decay of a SUSY particle yields at least one supersymmtric daughter particle. If that particle happens to be the lightest supersymmetric particle (LSP), it can't decay into anything and so is stable. The LSP is a candidate to explain the dark matter observed by astrophysicists. Often this LSP interacts only weakly in the detector, like a neutrino, and as we discuss below its presence can be inferred by an imbalance in the rest of the event. As an example, a bottom squark most likely would decay to a bottom quark and a neutralino. The neutralino could be light, and be the LSP.

Recently, the DØ Collaboration at Fermilab completed a search for bottom squarks. We looked for events which had two unbalanced sprays of energy. These sprays of energy are called jets and arise when quarks transform themselves into particles which are then observed in our detector. The amount of energy observed in the detector tells us the energy of the quark. We use a device called a calorimeter to measure the energy of jets. Our calorimeter is made from plates of uranium immersed in liquid argon. Particles passing through the argon cause ionization, which we measure and relate this to the total energy. We can occasionally tell what type of quark was produced. Heavy quarks, like bottom quarks, have a long enough lifetime that they can be identified using very small strips of silicon which measure their decay point to 10s of microns.

We also ask that there is an imbalance of energy in the event. Basic physics tells us that energy and momentum are conserved in collisions. In our originating proton-antiproton collision, the net momentum is 0 as the proton strikes an antiproton head-on while each has the same energy. This means that the products of the interaction have a net momentum of 0. Since momentum is a vector quantity, this also means that the components of momentum in any direction should be balanced and have a total value of 0. This is a powerful feature of experiments operating at colliding beams. An event which has a large imbalance of energy is therefore missing some energy. This missing energy can be due to having particles in the detector which carry energy but do not interact in the detector. The most common type of non-interacting particle is a neutrino.

So, we end up requiring two jets tagged as being from bottom decays and significant missing energy. This is the same topology expected for two bottom squarks where each decays into a bottom quark and a non-interacting LSP.

This same topology was previously used to search for third generation leptoquarks, which could decay into bottom quarks plus a neutrino. More details on the event selection, and the operation of the detector, can be found in the LQ3 and sbottom search paper published in 2010 in Physics Letters B.

The figure shows the missing energy plus our estimates of the known sources. 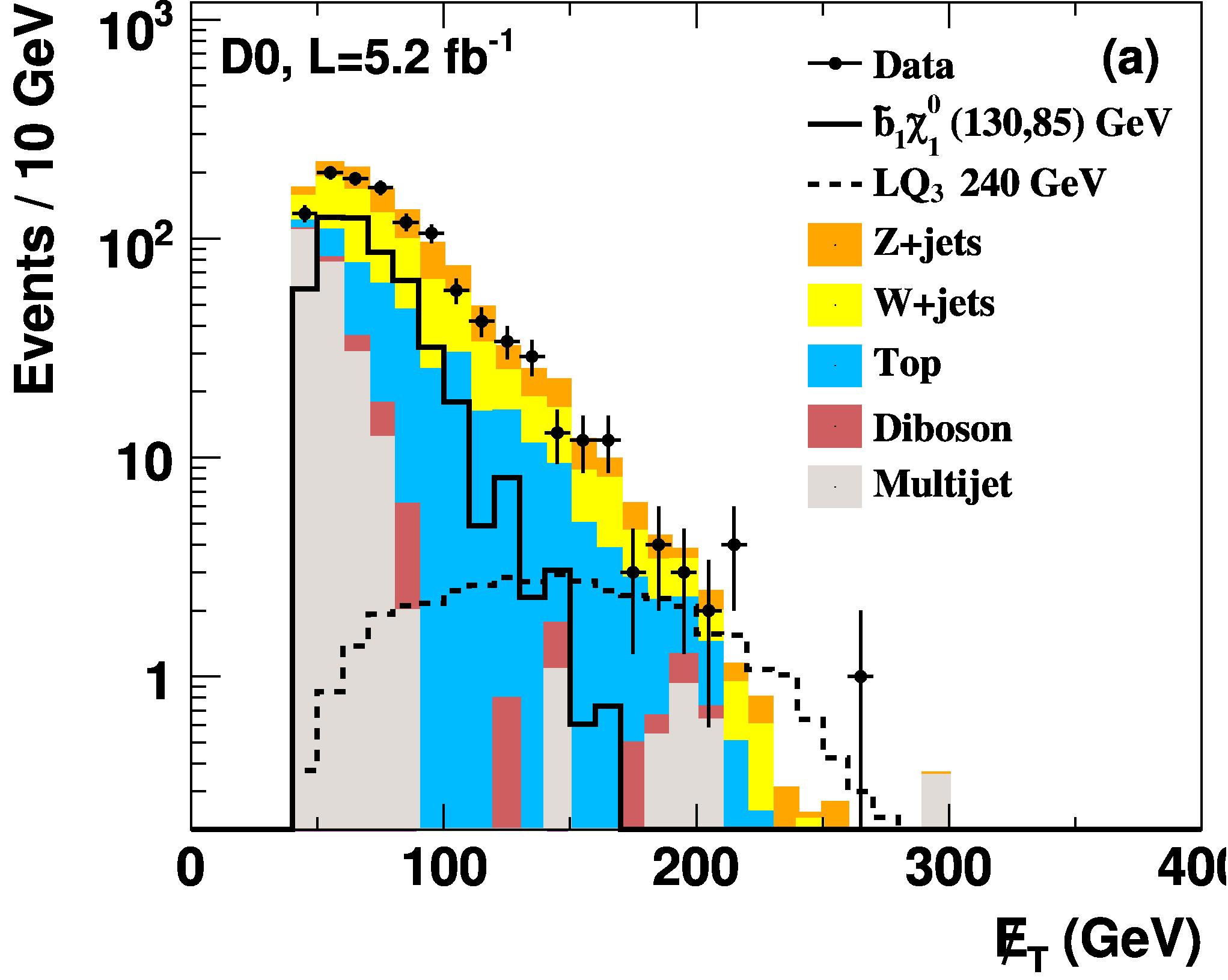 Thus the estimated number of events from known processes is in good agreement with what we see in the data. As we do not observe an excess, there can not be very many collisions which produce bottom squark pairs. Statistical analysis allows us to set a limit on the probability to produce a bottom squark pair in any given proton-antiproton collision.

We translate this probability per collision to a limit on the mass of a bottom squark. Squarks with lower masses would be more likely to be produced (if they existed!) and so our lack of seeing anything rules them out below a certain mass. This mass limit also depends on the unknown mass of the LSP. We summarize our result in the figure where we exclude values of the bottom squark mass for certain values of the LSP mass. For example, if the LSP has a very low mass, we exclude squarks for masses below 247 GeV/c2. We also show limits from electron-positron experiments at CERN experiments and earlier limits from D0 and CDF. 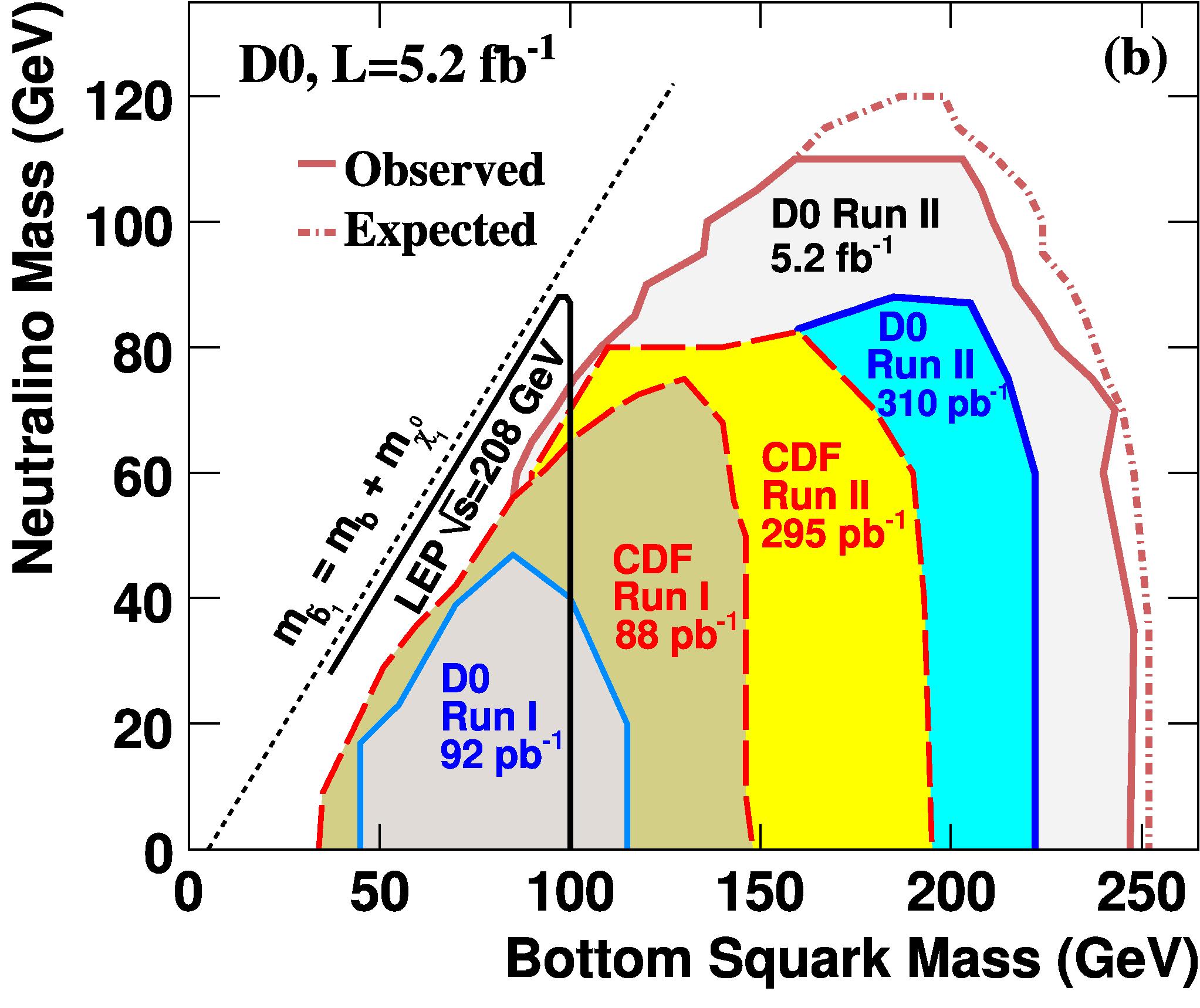 Our search for bottom squarks, like all other searches for supersymmetric particles, came up empty. Does this mean that SUSY is not a valid theory? No, it could just mean that the masses of the particles are heavier than what we could observe. Searching for evidence of SUSY will remain one of the highest priorities for the Fermilab collider and for future experiments at CERN's LHC.